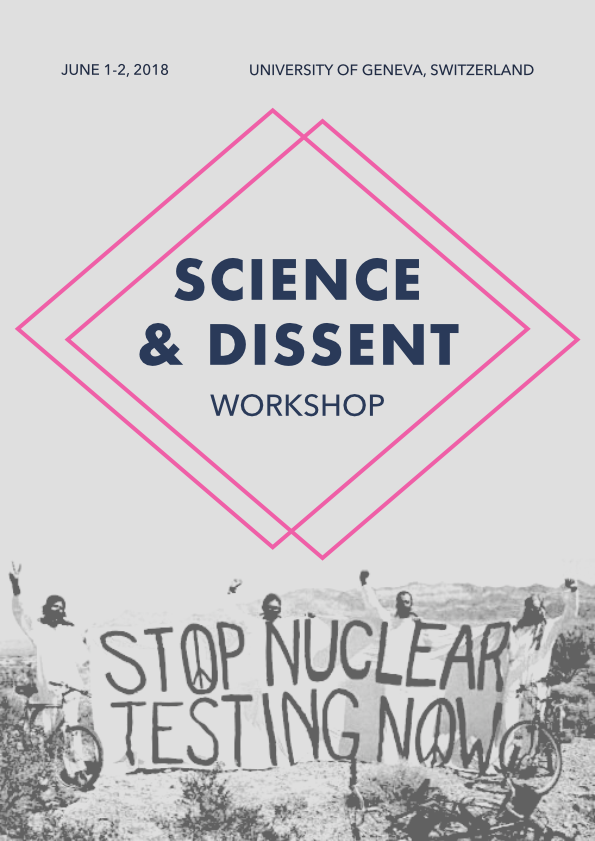 Held at the University of Geneva, Uni-Mail building. Room M1130 located on the 1st floor. Look out for posted signs.

Transport from train station (Gare Cornavin):
Take tram nº 15 with direction to Palettes. It runs evey 5-10 minutes. Get off at Uni-Mail tram stop (5th stop). The journey takes about 10 minutes.

13:30 – 14:30
Making as Dissent: The Performance of Producing Pharmaceuticals in Hackerspaces
Gabriela A. Sanchez | University of Geneva, Switzerland
The politics of Data in the intersection between Hacker Culture and Citizen Science
Christopher Kullenberg | University of Gothenburg, Sweden

The goal of this two days workshop, at the University of Geneva, June 1-2, 2018, is to explore the history and current workings of public participation in the production of scientific knowledge as a form of civic and political dissent. Individual citizens and grassroots organisations have long produced and analyzed scientific data about their health and their environment to support social and political dissent. Scholars have been ambivalent about these forms of protest, sometimes casting the reliance on science as empowering (Kullenberg 2016), sometimes highlighting how counter-expertise could be used to govern the critique of science (Topçu 2013). At a time when various forms of “citizen science” are gaining increased visibility, it seems timely to reflect on this part of the history of science and dissent.

The theme of the 1979 Sociology of the Sciences Yearbook, Counter-Movements in the Sciences (Nowotny & Rose, 1979), came after a more than a decade of protests from social movements and scientists towards the institution of science (Moore 2008; Kaiser & McCray 2016). The framing of the Yearbook bears witness of these events, but is also a good starting point to examine current challenges to science. Most contributors to the 1979 volume understood counter-movements as being opposed to science, scientific rationality, and its technological outcomes. STS scholars explored the response of scientists who cast these counter-movements as “pseudo-science”, “anti-science”, or simply as “irrational”. Scholars deconstructed the epistemic and political assumptions on both sides, and imagined ways to think about the value of alternative kinds of knowledge, indigenous, local, or experiential. They also reflected on the way in which science could take these voices into account in order to make science work “for the people”. STS scholars played no small part in promoting participatory mechanisms where the voices for these alternative kinds of knowledge could be heard, leading to a proliferation of deliberative institutions (Chilvers & Kearnes 2015), which exemplified a “participatory turn” in the relationship between science and society (Jasanoff 2003).

Much work has been done on the critique of science from the outside and sometimes from the inside of the scientific institution. But much less attention has been payed to the actors outside of scientific institutions who mobilized science as a tool for social political, and technological change. Yet, since the 1970s, a growing number of lay people have been producing scientific knowledge as a way to challenge public policies and corporate organizations. From feminists in the 1970s health movements who understood the explorations of their bodies as a form of scientific practice (Murphy 2012), to residents of toxic sites attempting to document their epidemiological consequences (Brown 2007), social movements developing “lay expertise” about clinical trials (Epstein 1996), and associations producing counter-expertise about radioactive waste in the 1980s (Topçu 2013), to citizens today producing scientific measurements of urban air quality (Gabrys 2016), there is a rich tradition of individuals and organizations, outside of main scientific institutions, who have mobilised science to support social and political action.

In this workshop, we will explore the history of science and dissent, focussing on the multiple social, political, and epistemic dimensions of the production of knowledge outside of scientific institutions. How did lay people establish the legitimacy of their scientific claims? What has been the role of the standardization of data for its political efficacy? How did the production of knowledge outside and inside of scientific institutions differ epistemically? How did social movements and NGOs work with scientific institutions? How much epistemic autonomy have counter-expertise organizations abandoned to conform to scientific norms? How did the unequal resources and power between grassroots organizations and research institutions constrain the issues which they addressed? What has been the role of scientists who left research institutions for grassroots counter-expertise organizations? By answering these questions, and many more, we hope to provide a new understanding of the relationship between science, expertise and civil society.

For any questions regarding the workshop, contact Gabriela A. Sanchez